On March 4th a new series, Making Fun, premiered on Netflix, and my excitement for a brand new tv show about making could not be overstated. However, my enthusiasm diminished quickly when it became clear that the title “Making Fun” was chosen for both interpretations of the phrase. The show is both a display of playful creativity and a platform for bullying behavior that raises some major issues when it comes to representing the heart of what it means to be a “maker.” 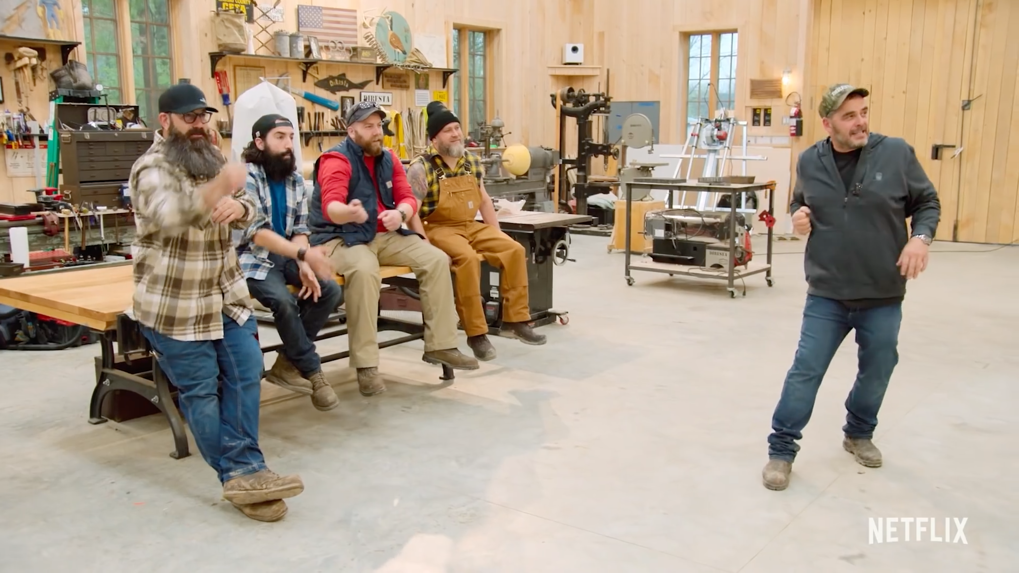 In each episode, kids have the opportunity to "pitch" an invention idea to a team of builders led by Jimmy DiResta. The rest of the team includes Jackman the engineer, Derek the best friend, Graz the short guy, and Canadian Pat. Plus, for one episode, Justine Silva joins the team. The builders choose one idea to bring to life on a large scale, with most of the builds being the size of a car or larger. During each build, we get to see some maker skills that don’t often get featured on tv like using a lathe, CNC plasma cutter, and other large shop tools. The projects include a taco shooting t-rex, a guitar boat, and a unicorn-bicycle that farts glitter, to name a few. At the end of each episode, the team invites the kid(s) back to show them what was made.

There has been a lot of backlash in the maker community about Making Fun for several reasons, but my biggest gripe with the show isn't the fact that they cast five stereotypically bearded white men to play the "makers"—I'll refer to them as the drab five—or that they replicated the same premise as an already established YouTube channel. The biggest reason for writing this review is to express my sheer disappointment in the missed opportunities that could have uplifted, inspired, educated, and exemplified the positive qualities of the maker community.

I care about the perception and the future of what it means to be a "maker". I believe it's important to call out the shortcomings of our culture and express the direction that I want to see maker content take in the future. If you're reading this and you're a maker, I would encourage you to do the same. Netflix and the television production companies that work with them have a responsibility to care about the impact of their media on the communities that they portray, and I hope they will listen.

Asking kids for invention ideas is a great premise. In fact, the YouTube channel I mentioned earlier, "Kids Invent Stuff," is a wonderful platform that uplifts kids' invention ideas, exposes viewers to new making processes, and uses positive reinforcement to reward inventive and creative problem-solving. The suggestions are genuine and the enthusiasm is infectious! Check out their channel here: https://kidsinventstuff.com/

So what went wrong with Making Fun? I'd like to describe some impactful moments in the show that were off the mark, and then propose how the show could have better represented the heart of the maker community.

"Too Cool for School": In the show's intro, Jimmy DiResta sets the tone by explaining that he doesn't want to be there, and doesn't like kids. I understand that this is a bit tongue in cheek... but it also isn't. The grumpiness and negative attitude create a caricature that makes you want to say "if you don't want to be here, why are you here? And why am I here?" It's unfortunate that DiResta's poor attitude was chosen to be featured, but if the vision of the show HAD to include a grump, we need to see a counterpoint too. The character Ron Swanson was also a grump who was stuck in his ways, but he had Leslie Knope to balance him out. Give us a Leslie Knope!

"Making Fun... of the Kids": The next segment is full of put-downs. As each of the kid(s) pitches, Jimmy belittles their ideas using words like "stupid", "brat", "dumb" etc - it's cringeworthy. This is such poor behavior, especially about the sharing of a subjective, creative, idea. Jimmy also feeds kids the lines that express how they feel about what was built. For example, he restates a girls’ invention request for two unicorns as “like the greedy little princess you are” and she has no choice but to answer “yes”. It's damaging, if not to the child actors on the show, then the audience of kids watching. There will be fans out there who think this is funny and understand the nuance, but my fear is that it will give adults the license to copy this behavior thinking that it won't have any negative effect. I can attribute much of my own self-confidence issues to this type of bullying from my own family growing up, and it sucked!

Rudely calling "NEXT!" to ideas is traumatic: Did the producers say "Hey kids, come up with an invention idea that can be accomplished in 1 week with the exact tools in this shop and 5x men?" No. But when an idea presented didn't fit the show, it was sentenced to ridicule, the children were insulted, and swiped off the screen with an enthusiastic “NEXT!”. In the real world, the brainstorming process is a messy winding road, and using stop words and calling kids names will teach them to hinder their creative flow, not inspire it. The kids could have been a part of the brainstorming, and we missed the opportunity to see a good example of collaborative problem-solving.

"Making Fun... of good making processes": When employing mathematics or creating detailed plans, builder Paul Jackman (the engineer) is called a “nerd" for using those skills. Even jokingly calling someone a nerd for using the correct process to figure out a problem will surely teach youth that it is uncool to be smart. This could have been an excellent opportunity to show how math can be applied to make a project work in the real world, but instead, we learn that doing so will only get us teased by grown men. The good news is that the show was successful in making some creative “making montages” that included interesting audio and whimsical rhythms while showcasing the build process. These vignettes balance entertainment and education and are a glimmer of what the show could have been.

If Netflix or the showrunner cared about the impact of the show on the maker community and wanted to make a show that gives you "all the feels," a few tweaks could make it much better:

Give purpose to the project: The story lacks purpose because we don't get a chance to care about why the invention matters. Inventions solve problems, and yes, that problem can be that we're in a pandemic and haven't laughed enough in a few years. Identifying even a silly problem, or giving a prompt (ex: What would be the most fun vehicle to drive to school?), would have made the audience care about the outcome. Imagine if the show were to feature Magic Wheelchair, a charity that enlists makers to create epic costumes for kiddos with disabilities so that they can go to Comic-Con or Halloween. This would establish a "feel good" reason for the making, provide a real-life kid with a costume and a purpose for the build, and give a deadline and a goal that would elicit natural drama and a sense of excitement to hear how the story will end.

"Not Just “Because": Do you remember asking why you had to do something as a kid only to receive "because" as the answer? This seems to be the only reason anyone on this show does anything too. There are no stakes. There is no judge. There are only men who govern themselves. I'm guessing that each of the builds took a week, but what if they didn't? Who would care? If there was some structure, the drama could have been built around not finishing in time (ahh 3 hours left!), to a high standard (these teeth don't look scary enough!), with all the kid's dream requirements (oh no we forgot that it had to poop glitter! Quick, to the compressed air canisters!), etc. The mid-build requests from the children were so obviously contrived and didn’t add anything to the story. And one more note - I was appalled that the F-word was mouthed when the children were calling to check-in, that type of “grump” persona is going too far for a kid's show, no matter the circumstance.

Give Female Makers Purpose: Justine, a maker who was previously working on the builds off-camera, was a welcome addition to the cast. It’s important that women are seen on camera to combat the perception that only men deserve a place in the woodshop, especially on a show that kids will watch. Justine was introduced in a montage that vaguely mentioned her talents and had no specific reason for her joining in. Without a significant differentiation in her skills, attire, and attitude from the guys, you have to attribute her appearance to the producers' pressure to gender-balance the show. It would have been wonderful to explain that they needed a maker who was an excellent illustrator to lead the way for the “pizza flags,” and focused on Justine’s illustrations as a superpower. We know that she is in fact known for her illustration skill from the TV show “Making It,” where she took the winning title in season two. Thank you, Justine, for stepping up as much as you could. We want female representation, but why did it have to feel like a forced afterthought?

Who is this show for, really?

If the intention was to create a show targeted toward Jimmy’s fanboys in order to evangelize the demeaning attitude he portrays, then this show is a success. Fans of Jimmy may not see any problems with the criticisms I mentioned above, but this show is a mirror of truth that shows how hard it is to feel respected in the maker community if you don't look, act, and feel like the men of Making Fun. Because the show is served to the larger Netflix audience, it makes the impact of this content even more problematic to the future of the maker community as a whole.

I see Jimmy’s workshop and I'm like "Wow, what an amazing playground to bring any idea into reality, it has everything and enough space to make it all happen. I would love to work in that space!" But then after seeing the drab five and the way they act, I wouldn't want to hang out in a place where I will surely be judged, bullied, and disrespected. My question is: Do you really want some viewers to walk away feeling that they don’t belong in a place like Jimmy's workshop?

If you must feature Jimmy DiResta "Because (he's) a maker celebrity or whatever," make him an expert and shine the light on his maker talents, not his elitist attitude. I mean, Jimmy's talents are wonderful! Did you see that guitar boat! Beautiful!

Making Fun is a visually stunning, high-production-value show full of inspirational builds that is poisoned by a sour attitude that does not represent the creativity, collaboration, and inclusiveness that we, the maker community of "non-maker-celebrities", strive to present every day. I hope that Netflix will continue to create more maker content like this without the attitude problem, and to this version, call “NEXT”! 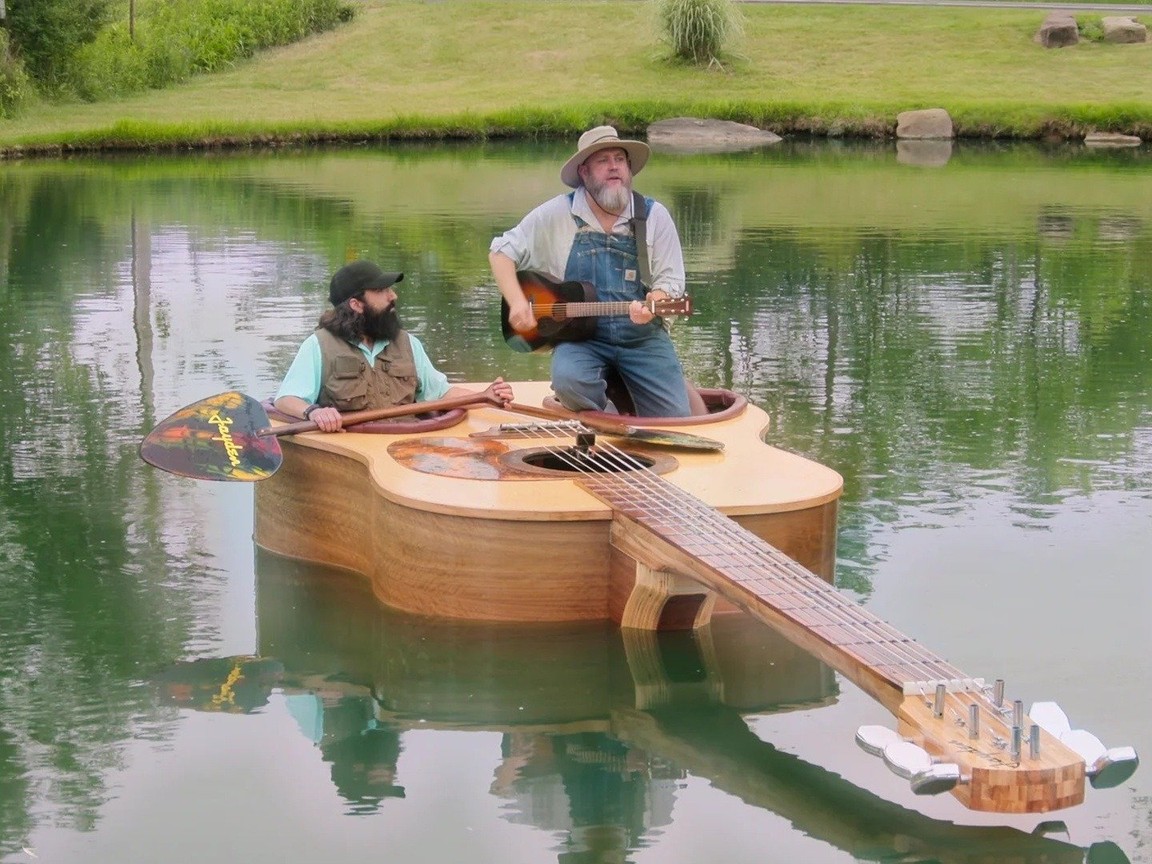