This post is a work in progress - It's a collection of all the Digital Tap Dance Projects that I know about. Do you know of one that isn't listed? Please tell me about it.

I was probably about 12 years old when I saw the movie "Tap." At the end of this movie, Gregory Hines connects his taps to a wireless drum system and taps all over a club- up and down stairs, on walls, and through the crowd. The tap sounds were translated into sound effects that were transmitted through the PA system of the club.

As a young tap dance student, I thought this was the coolest thing ever.

In high school, I still had this dream in my head that I wanted to make digital tap sounds just like Gregory Hines - I thought I could mic a wooden board on the stage and process the sounds through the microphone to create different effects in the ears of the audience. At the time, I had no technical mentor and I couldn't find anyone who could help me educate myself about ways to do this, so the project never worked out. 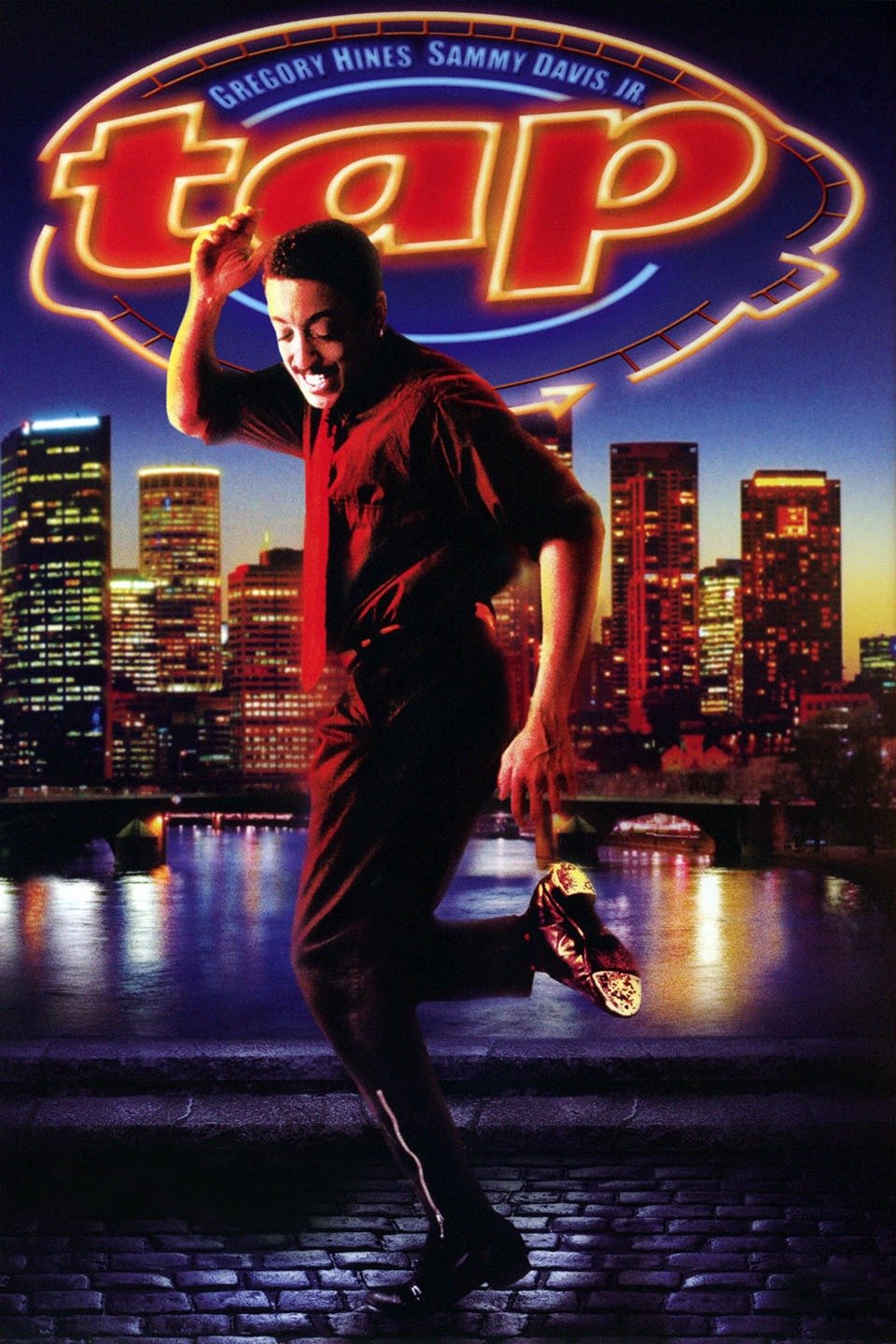 From 2012-2014 I attended the ITP program at NYU and had finally found a supportive community for someone like me who doesn't want to choose between art & technology.

I made my first prototype of a digital tap dance system there with another student, Mike Milazzo. The system used pressure sensors in the shoe and XBee radios to send the pressure data back to a computer.

The system worked, but left a lot of room for desire.

Tap dancers use their shoes as an extension of the leg, and therefore pressure sensors inside the shoe required the dancer to change the technique they use to dance. It was like strapping drum sticks to a drummers fore-arm - without the flick of the wrist, they would have to completely retrain their muscle memory.

In addition, the system was clunky and required multiple radios and a computer so there were many places for communication to drop or data to get lost. It was a good first try. 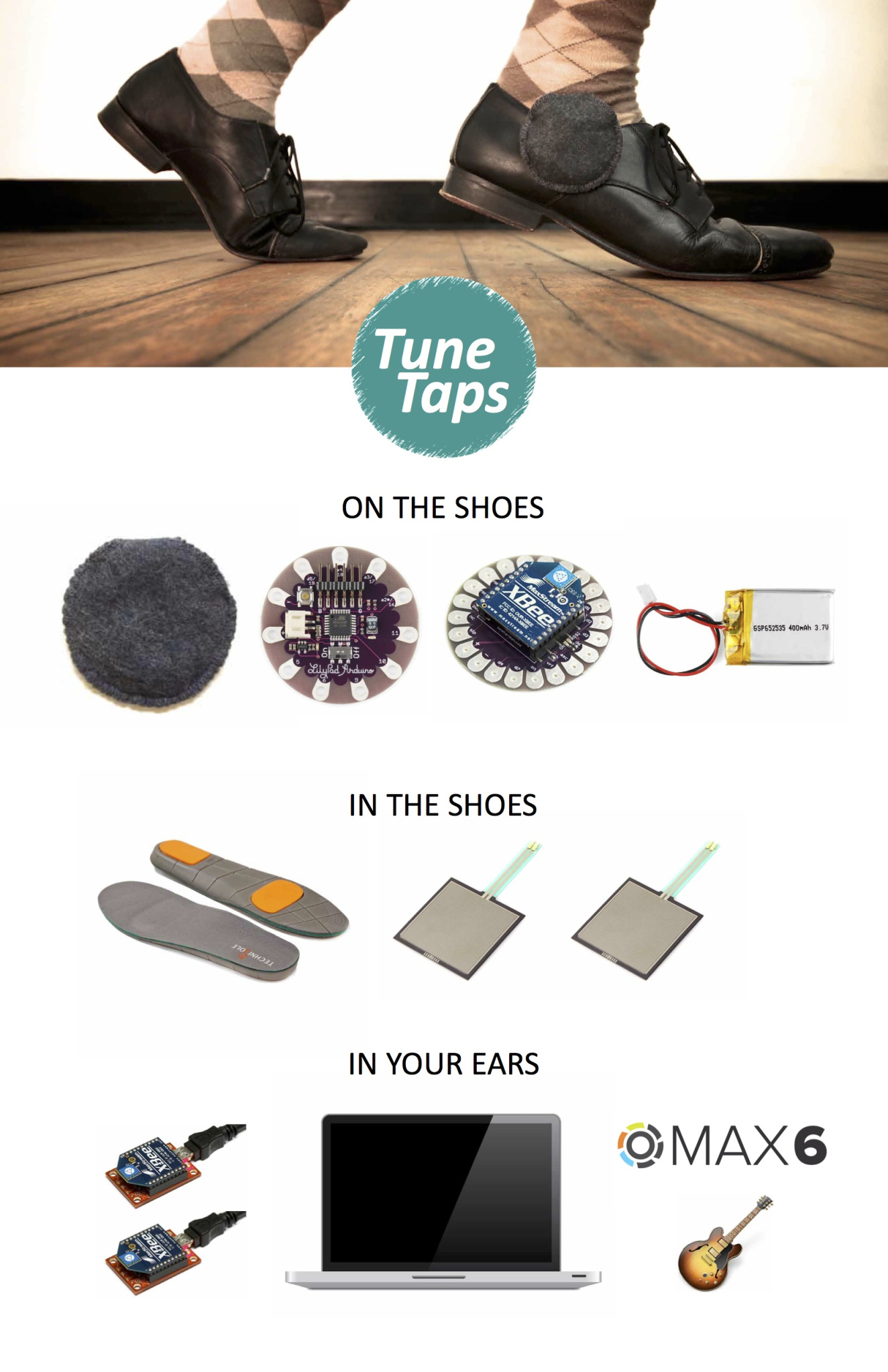 The takeaways from this prototype were that I could feel the potential of the synergy between the digital sound and the food action, but with the delay in sound from the shoe to the feeling of the sensor being inside the shoe, it didn't work.

I've been wanting this for 20 years, so it's my pet project - I keep looking for new tech and opportunities that can make a really good version possible.

Below is a collection of digital tap projects that I know about and will use to inspire and inform my project. If you know of one I've missed, please let me know. Thanks!

Alfred Desio first used his invention Tap-Tronics (tm) in concert in 1982. Following are a few of the reviews: "What made Zapped Taps special, apart from the sheer excellence of the dancing, was Mr. Desio's innovation, Tap-Tronics. In this concept, each dancer uses electronically amplified tap shoes. Transducer microphones in a tapper's shoes are wired to a transmitter either hand-held or places in a pants pocket. The tap sounds are relayed to a receiver and can go through special effects modules, a number of synthesizers and other electronic equipment.

Don't know much about what's going on here, but I believe this is a flat board midi controller underneath the dancer.

From YouTube: "Hexa, a tapping music piece, was created by choreographer Anita Feldman and composer Lois V Vierk, and was premiered at the American Dance Festival in North Carolina in 1988. It is danced on The Tap Dance Instrument, a multi-timbre, multi-pitched modular floor invented by Feldman and instrument designer Daniel Schmidt, and also includes live percussion and electronic processing of all of the sounds. Hexa was named for all the sixes in the piece - hexagonal floor shapes, six feet on the Tap Dance Instrument, six percussion instruments played by the musician - and for the magical connotations of "hex" and "hex sign.” These are excerpts from a performance in 2012 by Hofstra University dance students."

“I’ve put together a pair of shoes that, with a little help from an Arduino, will let me trigger MIDI signals. There are FSRs (Force Sensitive Resistors) in the heels and toes of the shoes, which serve as the tap sensors. Basically, an FSR, without any applied pressure, is like a break in a circuit (i.e. has infinite resistance), and as you apply more force, it becomes less and less resistive. So, if we hook up one end of an FSR to a voltage source and the other to the Arduino’s analog input, we can send a signal to the Arduino every time we apply pressure to the FSR. We can then take this signal, convert it into MIDI, and start making sounds. I used the Serial-MIDI Converter from Spikenzie Labs. The serial-MIDI conversion could likely be performed in MAX or otherwise manually, but this does the trick and saved me some time. For the actual sounds I used Garageband, but you could use MAX, Ableton Live, etc.”

From the Wired Article:

“To create the system, called "the Megalizer," Brun used two force sensors for each shoe – one in the heel and one in the toe – along with a wireless transmitter (Xbee) in each shoe to capture the pressure applied to the sensors. A USB dongle containing the XBee receiver chip connected to the computer received the signals from the Xbee emitter chips.

Brun developed two separate programs to operate the musical shoes – one to process the receivers' inputs and an Adobe AIR application that interprets the signals, and chooses and plays the sounds. The system let the wearers control the sounds (volume, sensitivity of the shoe and the sound effect) that play when heels and toes are tapped on the ground, thanks to a simple interface (which is called "Minimal Components" and was created by Keith Peters).”

The video is highly produced, and looks awesome. Although I doubt that any of the drum beat was actually created by the shoes (especially since the metronome is kept constant over many cuts in the video). The creators mentioned that there was a lot of technical difficulties, but with over 4 million views, it's proof that people thing that shoes creating music are cool (if not just that these particular dancers are awesome, which is also true). 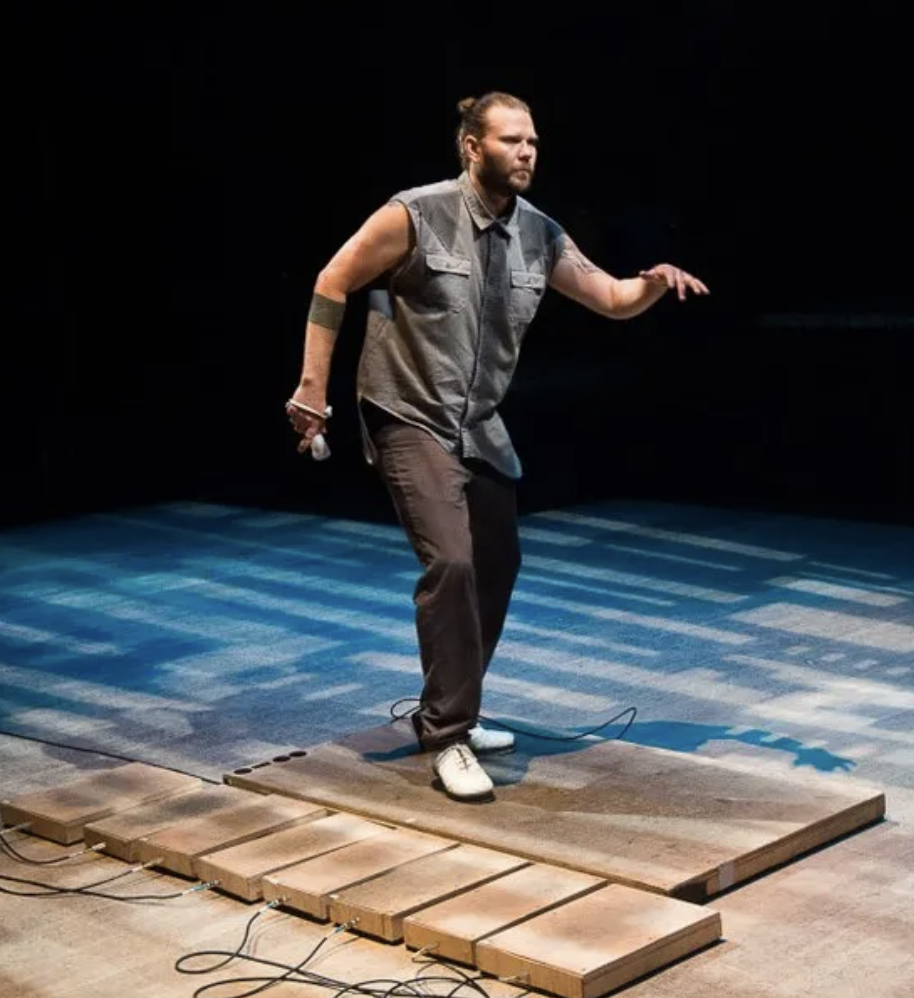 "His latest board is framed by 12 pads, each equipped with force-sensitive resistors—which means that he can play a full musical scale and sustained notes. He can build a groove, layer by layer. With a microphone and electronic sampling, he can digitally tie any sound to his tapping and manipulate it with a handheld Wii controller. He’s also experimenting with infrared proximity sensors so that some triggers will not be floor-bound: A fan kick might instigate a whoosh. But the center of the board is still just an amplified platform for hoofing. In that way, Young has stayed true to the sound of taps on wood."

"Michelle Dorrance brings tap into the age of electronic music with collaborator Nicholas Van Young. Tap has always been a way of talking to the stage, now with Van Young’s electronic tap boards, the stage is able to talk back, as every step, swipe, and scrape sets off an element of sound, building musical loops, turning the stage into a musical instrument in its own right."

I found this blog post from Andrew Nemr - he expressed his own spark of inspiration by watching the movie "Tap". He also put together this post with some more tap history and electronic tap projects: https://www.andrewnemr.com/technology-and-tap-dance/ Keep On Making It: Challenge 2 - Solar Powered Light Up Terrarium